A nondescript green door at the end of a cul-de-sac features a stunningly well-framed, if comically tiny, view consisting of two nation-states and one country, with the dome of St. Peter’s perfectly situated in the center.

Buried a few days after Pompeii, the small but wealthy village of Herculaneum, on the north side of the volcano, had more time to panic and evacuate than its more famous neighboring city.

The eruption eventually covered the town in up to 60 feet of ash and mud, making the excavations of the site labor intensive and complicated, but safekeeping the ancient city in a remarkable state of preservation.

The ruins of the city were first uncovered in 1738 under Spaniard Rocque Joaquin de Alcubierre, and excavations and active research continue today. The ruins are best known for the extraordinary beauty of some of the preserved frescoes and mosaics decorating the fine homes, as well as the fact that the first intact Roman skeletons discovered for study were found here. Over 300 sets of human remains have been uncovered at Herculaneum.

Of particular note is the Villa dei Papyri, once home to a massive library and named for the treasure trove of Roman manuscripts discovered and saved from the ruins between 1752 and 1754. The Herculaneum papyri are now stored at the National Library in Naples, the French National Academy in Paris, the Bodleian Library at Oxford, and the British Library in London. The Getty Villa in Los Angeles is modeled on the Villa dei Papyri. 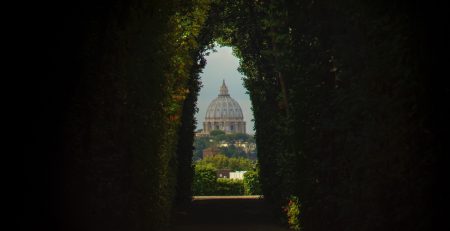 A nondescript green door at the end of a cul-de-sac features a stunningly well-framed, if comically tiny, view consisting [...]

Roman sexuality was a big problem for the 19th-century archaeologists and curators responsible for excavating and preserving the remains [...]

A master of trompe-l'oeil creates a stunning, tourist-fooling dome out of a flat ceiling. The Jesuit church of Saint [...]

View More
We use cookies to ensure that we give you the best experience on our website. If you continue to use this site we will assume that you are happy with it.OkPrivacy policy